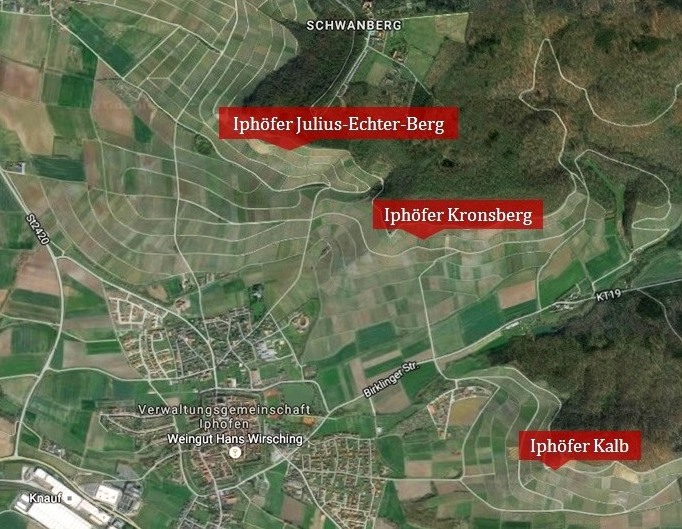 Without a doubt, the Iphoefer Julius-Echter-Berg is one of Franconia's prime vineyard sites. Its namesake is the famous Prince Bishop Julius Echter of Mespelbrunn. Hans Wirsching Sr. is considered 'The Father' here, because in the early 1920's it was his idea to name the best vineyard site of Iphofen 'Julius-Echter-Berg'.

This steep slope that faces to the south, is located in a basin, 280m above sea level at its base and 380m above sea level at its height. The unique soil structure and micro-climate influence the location and distinguish it from Riesling sites along the Moselle and Rhine Rivers. The greyish-brown gypsum keuper soil radiates the sun's heat and releases vivid scents and fragrances. The subsoil readily retains moisture which lets the grapes ripen slowly over a long period of time. The wines obtain their intensity and particular flavour and aroma from a sediment layer of green 'reed' sandstone which is unique to Franconia.

The Steigerwald is one of the German wine-growing regions with the highest average must weights. At the Wirsching Estate, the principle of using only the best site to plant the best grape variety applies, especially, when it comes to our Riesling and Silvaner. With the Riesling, the acidity remains distinctive and influential at about 8 per ml - generally referred to as Continental Riesling. Similarly, this applies to our Silvaner. At most, both can be drunk/consumed/enjoyed too early. The combination of the gypsum keuper soil and southern facing site makes for strong, expressive wines with a striking acidic structure. The dense wines, rich with extracts, are considered durable/made-to-last and are aromatic to such an extent that they quickly attract attention at any Franconian wine tasting.

The Iphoefer Kronsberg is one of the top vineyard sites in Franconia. It's so named after the oak woods, sitting enthroned like a fur cap on the steep slopes facing south, above the vineyards. During the Keuper period, gypsum and lime sandstone were deposited here as marine sediments. Thru weathering the Keuper soil, with its high mineral content, was developed. The slope and the soil's excellent water and heat retention properties can be charcterized as 'water and warmth, under a crown of oaks'.

Combining the Silvaner and Riesling grapes, with the Kronsberg site, yields powerful, expressive wines with a striking acidic structure and a distinctive natural earthy character, yet with significant storability. One can taste the very high mineral content, however, because of the high lime content in the soil, the acidity of the wines is deeply softened. Additionally, in the bouquet, one can discern a very clear, yet subtle fruitiness.

The Iphoefer Kalb is a steep slope that faces south. On easily warmed Keuper soils grow delicately fruity, elegant wines with fresh lively aromas. The mild climate and the long growing season allows the vines to absorb the many minerals in/from the dark Keuper soil and gives the wines their fruity and full-bodied character.